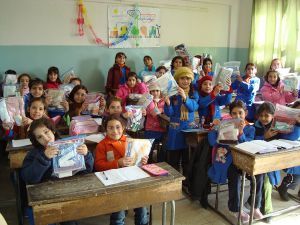 Almost two years ago, Kingsway-Lambton, together with Runnymede United and Royal York United, joined together to sponsor a Syrian family.

Just over one year ago, we excitedly welcomed the Saadeh family, who arrived from Lebanon, where they spent four years after fleeing the war in Syria.

Our sponsorship commitment was for one year, so this means our sponsorship is "officially" ended, but many volunteers have become friends with the family, and many have offered continued guidance, should they need it.

The father of the family, Antoun, offered these words to the three churches and their volunteeers. " Thank you, thank you, thank you! The United Church reached across half the world and gave us their hands. All the help we were given - in so many things - we didn't expect any of this. We so appreciate your efforts and we will never forget what you have done."

The three churches thank the Ministers, Board Chairs, and of course the congregations who supported this effort. It has been an amazing gift, and journey, for all.