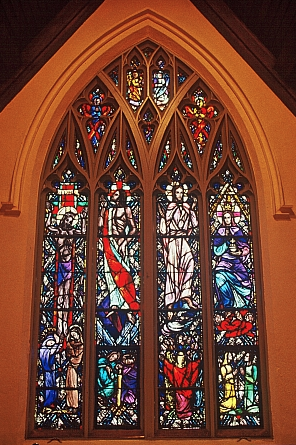 Description:
The window depicts the triumph of Christ; moving from his Crucifixion through his Resurrection, Ascension, and his triumph as King in Glory. The left hand panel depicts Jesus on the Cross, and below him, His mother and the other women at the foot of the Cross at the time of the Crucifixion. The next panel is the Resurrection, and shows the two women at the empty tomb. The panel to the right is the Ascension. Gathered below Christ's feet are the disciples whom he leaves behind. In the final panel on the right hand side is Christ as King who reigns in Glory. Below Him, the medallion with the two figures depicts the devotion of the people to Christ the King. In the medallions in the upper reaches of the window, you will find Heavenly figures—the Cherubim and Seraphim. The window in its entirety is to indicate the triumph of God's love through Christ, in the Cross, the Resurrection and Ascension to be with his Eternal Father.

Notes:
Mrs. Ellis was active in the congregation, associated for many years as assistant to Mrs. Dickinson and Mrs. Milne with the Junior Choir and the Christmas Pageant.