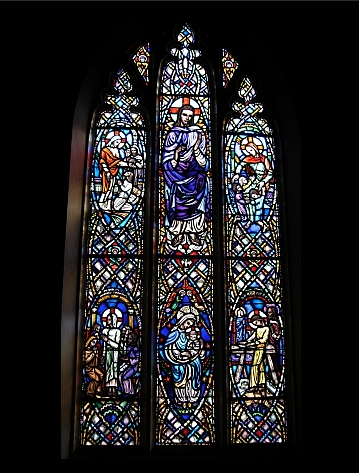 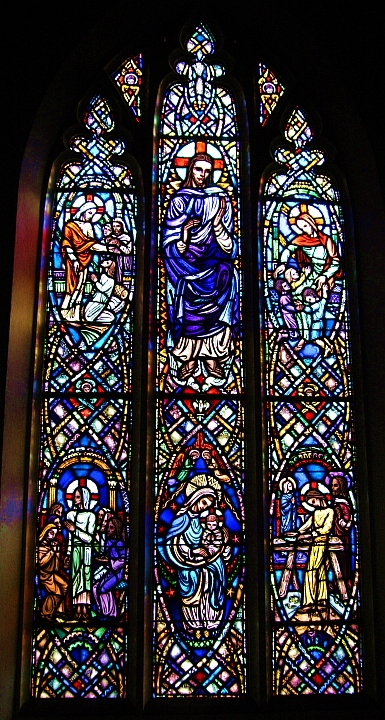 The location of this window was important to the Cowan family because it faced to the east and to what was then the main Sunday School wing of the Church. The west wing had not been built at that time.

Notes:
This was the first window to be donated to the Church. The second was the window in the Sanctuary/Chancel.

Given by Walter and Jean Cowan in memory of their son whom they had lost when he was quite young.

This window is the only one that was done jointly byYvonne Williams and Esther Johnson. From that time on, Yvonne Williams had her own studio and operated alone.

As this window illustrates, Yvonne Williams' early style was Neo-Gothic. But, here we can see that Williams is no longer merely replicating a Gothic style but is updating it to reflect twentieth century sensibilities. 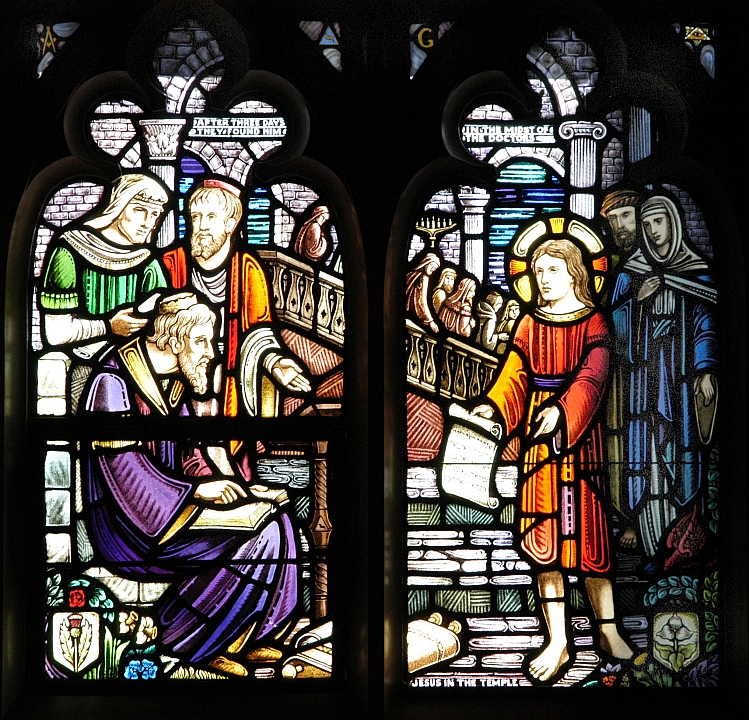 Description:
This window is placed close to the entrance to the Sunday School Wing of the Church. It pictures Jesus in the Temple as a lad of twelve. It re-captures the moment when Joseph and Mary, after searching for their son, "sorrowing for three days", finally find Him. It is based on Luke 2:40–52 and sets forth the vital importance of teaching and learning. Sound instruction is symbolized by the doctors, and the inquiring mind of the alert boy who is "both listening to them and asking them questions."

The first word on the scroll that Jesus holds out is the word is anoki, which is the emphatic form of the first person 'I'. [Rev. Hugh Reid] Anoki is the first word of the Ten Commandments.

Several symbols of the Freemasons Society appear in the window, together with flowers and birds, representing interests of Mr. and Mrs. Hunter Henry, in whose memory this window was dedicated. The symbols of the Freemasons include the temple itself, the blocks of stone, and across the top of the window, the compass and square, the pyramid, the letter 'G', and the all-seeing eye. The Freemasons use the tools, etc., of stonemasonry to symbolize their ethical and spiritual values.

In the lower corners of the window, the Scottish thistle and the trillium are given special prominence. The thistle is a reference to Scottish heritage and the trillium to Ontario, reflective of the Henry family's life and history. [Rev. Hugh Reid]

Notes:
Given by Mr. and Mrs. C. Fred Graham, Barry and Christy. [A Church in Time]

Mr. Henry was a distinguished teacher, highly esteemed by his students and by his colleagues. He was one of the founders of the Ontario Secondary School Teachers' Federation and its first secretary; later he was Secretary of the Teachers' Superannuation Commission. He was a dedicated Elder of this Church for many years and a prominent Mason. Mrs. Henry was an ideal companion and helpmate. She came from a family in which education was a prized privilege. A graduate of the Kingston General, she was Superintendent of the Niagara Hospital before her marriage. Her father was a doctor in Eastern Ontario for fifty years.