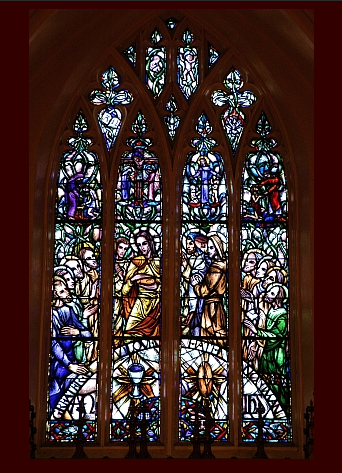 Description:
The "Chancel Window", as it's called, is the first stained-glass window you notice as you enter the church. This window depicts the Last Supper, since, of course, the Last Supper is the central and focal point of Christian Worship. The Last Supper usually shows Jesus seated at a rectangular table with his disciples, but this could not be done in a window which had four fairly narrow panels. That is why you see a somewhat circular table with "Greater Love Hath No Man" written around its border. Jesus is breaking the bread with His twelve disciples.

On the table are two inscriptions. On the left is Alpha and Omega (the beginning and the end). On the right are the letters IhS which represent the first three letters (iota, eta, sigma) of the Greek spelling of Jesus (Iesous or ). In Greek the long e or eta is often transliterated with an h.

Note: The IhS symbol is not to be confused with the Greek letters (Iota Chi Theta Upsilon Sigma) which spell the word ichthys (or ichthus) meaning fish. These letters form an acrostic for the words: Iesous (Jesus), CHristos (Christ), THeou (God), Uiou (Son), Soter (Savior). (CH and TH are each one letter in Greek.) "Jesus Christ, Son of God, Savior." It's where we get the fish symbol from. [Rev. Hugh Reid]

Above the table itself are four medallions. From left to right, these are:

Above these four medalions are three smaller medallions. On the left you see an open Bible with Alpha and Omega again. In the centre, just below the two Cherubs at the very top, is the descending dove. And on the right, is the burning bush.

It is interesting, if you look at the small medallions at the bottom of the window, you will see figures from nature: leaves and flowers; a tortoise and a hare (in the centre); and a fish and a dove (in the corners). These images all indicate that God's love is given not only to human beings but to all of His living creatures. The tortoise and hare combination (the slow and the fast) is a merismus meaning everyone. The fish and the dove is another merismus meaning everyone. "With the four you have a pretty good allusion to Genesis 1:20–25 with the creatures of the sea and air and those that creep along the ground and the wild animals...making the point that God's love in Jesus Christ is given not only to human beings...but to all creation. A merismus, by the way, is a common figure of Hebrew poetry and ancient rhetoric where a contrasting couplet is used to mean a whole: body and blood, east and west, heaven and sheol, tortoise and hare, etc." [Rev. Hugh Reid]

Notes:
This was the second window to be donated to the Church; the East Transept window being the first.

This window was given by a fund started by the Senior Choir, assisted by the Junior Choir, the Women's Association and the Sunday School. Finally a gift by the Session made it possible to install and dedicate this window.