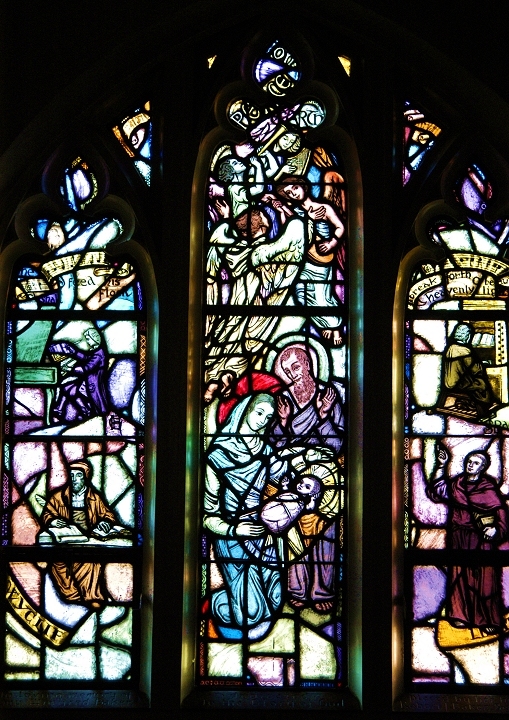 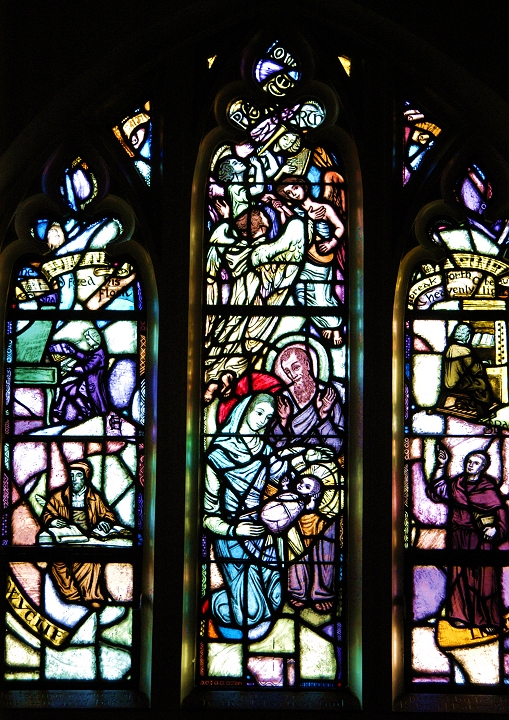 Description:
Mrs. Baker was for many years a devoted and faithful member of the choir, and it was her husband's wish that something musical be depicted in the window. This was done, basically, still retaining the central Biblical theme, with the two side panels representing our inheritance in the Reformation and in our musical tradition. The central panel shows the Mother of Jesus and Joseph with the Christ Child. Above them is the angelic choir who first sang their praise to the new-born Christ. They sing, "Peace on Earth, Goodwill to All Men". In the panel on the left, the central figure is Wycliffe, one of the English leaders of the Reformation and translator of the Bible into the English language. Immediately above him, seated at the piano, is Handel. Above Handel is written, "He Shall Feed His Flock", representing the great tradition of the Reformation in the music of our Church. On the right hand, the central figure is Martin Luther, the great continental reformer, again representing our tradition through the contribution of the German Reformation and the Protestant tradition in Scotland and England. Above Luther is the figure of Bach, at the organ. Inscribed above Bach is a portion of one of his compositions, "Break Forth, 0 Heavenly Light". This window reminds us of our indebtedness to the great musicians for the music that has now come to play such an important part in our Christian Worship. 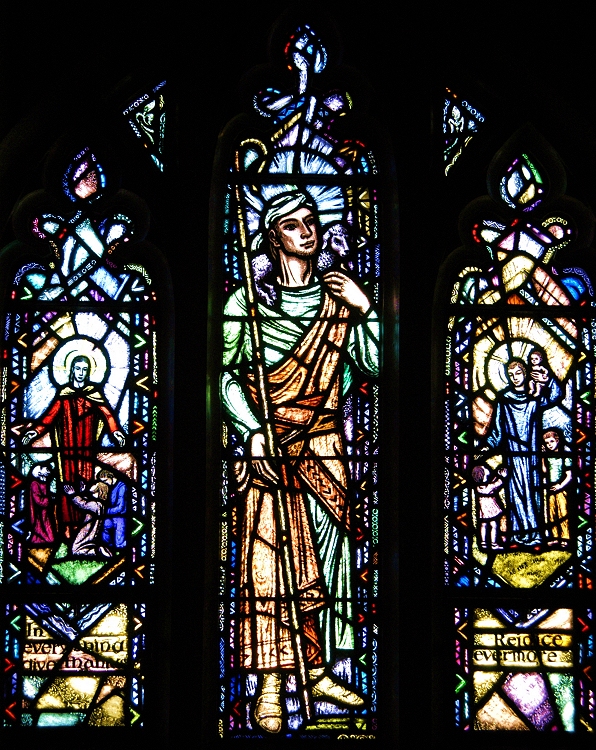 Artist: Yvonne Williams
Theme: Rejoice Evermore, In Everything Give Thanks
Size: 16 sq. ft.

Description:
It was decided, by committee, that this window would depict "Jesus, the Good Shepherd". Hence the central panel of the window is comprised of a figure of Jesus as a good shepherd carrying a lamb around his neck. On the right hand side you see a duplication of this, except that the figure of Jesus has a child on his shoulder and is blessing the two younger children beside him. On the left you have the same theme showing Jesus, with outstretched hands, blessing the people. This panel reminds us that the love and concern of God as "The Good Shepherd" reaches out to all His people. The window was given with gratitude to God for his kindness. It is an expression of thankfulness for the goodness of God, who, as The Good Shepherd, provides for his people and leads and comforts them.

Notes:
This was the forth window donated to the Church. The others, in order, were the East Transept, The Sanctuary, and the Central East Nave. 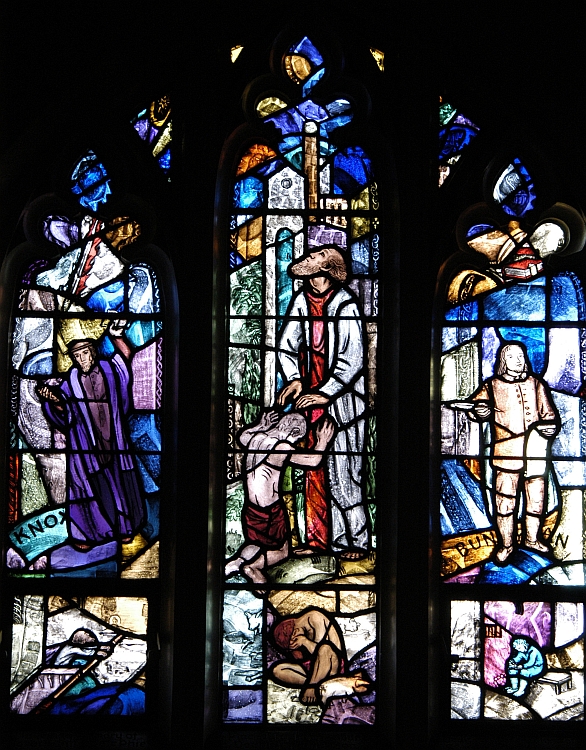 Description:
The central panel in the window depicts the theme of the prodigal son. The son is kneeling before his father and experiencing the forgiveness of a father's love. The panel is meant to remind us of God's love which offers us forgiveness and new hope. Immediately below the central panel, is the prodigal in a far country in the midst of the swine, so hungry and destitute. As the Bible says, "And he would fain have filled his belly with the husks that the swine did eat".

The two outside panels reflect the traditions of the United Church. The panel on the left is the Presbyterian tradition. The main figure is that of John Knox, the strong and dominant preacher of the Reformation in Scotland. Below the figure of Knox, with the open Bible proclaiming the Word of God, is a figure of a galley slave, pulling on a ship's oar and looking up to Heaven. Knox was once taken from Scotland as a galley slave and imprisoned in France for a while. The figure reminds us of Knox's amazing courage and unshakeable Faith. Knox returned, finally, via England to Scotland. His words on that occasion were, "God will deliver us to His glory, even in this life." It was after he returned that the Reformation took place in Scotland.

In the panel on the right, we have our Congregational inheritance represented by the figure of John Bunyan, the great English writer and author of The Pilgrim's Progress. Bunyan was a central figure in Congregationalism. In the medallion below, you see Bunyan in prison, reminding us of his unfailing faith in God's goodness despite adversity. This window, as whole reflects the forgiving love of God as shown in the Parable of the Prodigal Son and the Presbyterian and Congregational traditions.

Notes:
Given by Mr. Donald McPhie and his two children in loving memory of Dorothy May McPhie (Dorothy Harris), who died on May 24, 1954.

This window reflects some of the fine qualities of heart, mind and spirit of the one whom it honours. Mrs. McPhie was a woman of strong faith who manifested in her own life a heroic courage in the face of suffering and difficulty. This window is a fitting memorial to one whose life was an inspiration to her friends and her family.

The installation and dedication of this window by Dr. Lockhart marked the completion of the general plan for the main windows of the Church which was begun under his leadership early in his ministry. He had a part in the planning and designing of all the windows. He said it was a matter of great personal satisfaction to him that he was privileged to dedicate this final nave window before he left in June.